Korabo: Getting users is tough

I spent the last couple months developing and deploying a progressive webapp, partially because I thought I had a ground breaking idea, and partially to sharpen my web development skills. The fully functioning web app can be found at: https://www.korabo.io. Note that the application is intended for users with a US bank account.

Building and deploying a functioning MVP/prototype is relatively easy when compared to attracting users.

The fact that I am having extreme amount of difficulty in getting users to even sign up raises flags for the viability of this project.

The problem being addressed is the hassles of splitting proceeds after the fact with collaborators. This idea came about as I watched my wife try to split proceeds from a yoga workshop she hosted with a few other instructors.

The solution consists of setting the percentage share allocation prior to the service being delivered, and splitting proceeds on a per-payment basis. The application allows the user to specify percentage splits and create a customized checkout (e.g. video message) to share with customers via different types of links (url, QRcode), which directs customers to a credit card checkout powered by Stripe.

An example of a link to a checkout is a customized shield as the one shown below.

Stripe charges 2.9%+$0.3 per payment, additional 1% for international cards, and costs associated for maintaining and handling payouts for connected accounts.

I officially pushed master to production on Jan 18th, so its been less then a month since I launched at the time of this writing. The net results of my efforts thus far is a total of 7 sign ups including myself, of which 3/7 are complete strangers. Out of the 3 strangers, 1/3 of the strangers had fully completed the on-boarding process, which includes a stripe account set up. See the Google Analytics results since releasing. 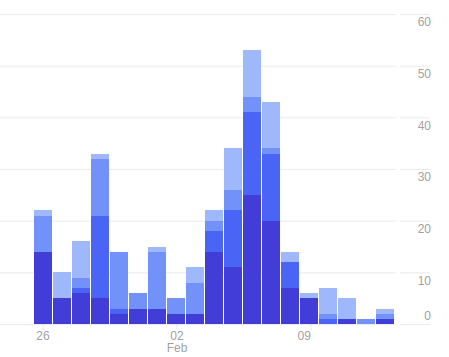 Jan 18th : Reached out to 2 family/friends. 2/2 signed up, but both stopped at the Stripe account on-boarding step.

Jan 21st: Posted on some GT MSCS slack channels. The post was mostly ignored, but I did receive one inquiry about what makes this app different from Venmo or Cushion. The action resulted in 0 sign ups.

Jan 28th : Responded to Ask HN: “What interesting problems are you working on?” which resulted in a few page views and 2 sign ups. My reply got 3 up-votes, exciting for someone relatively new to the community.

Jan 29th: Reached out to 2 “friends” and prior work colleagues which resulted in 0/2 sign ups. The exercise was disappointing for different reasons, thus the “” around friends.

Feb 4th: Posted an inquiry on reddit for design jobs as I needed proper logo design work to be done.

Feb 5th: Replied to a separate AskHN where a member was soliciting for logo design work coincidentally.

Feb 6th: Posted a Job posting on UpWork for Logo Design work. This resulted in 48 views on UpWork, and 2 proposals. I wasn’t anticipating any sign ups, but the post resulted in 0 sign ups and 0 completed jobs as the professionals associated with the proposal weren’t a fit with the project.

Feb 7th: Used the Show HN functionality. Probably the most disappointing result against my personally set expectations (clearly misplaced and high), as I was expecting some sort of response in the form of comments or votes! Phrases like reality is harsh, and the truth hurts really hits home here. That said, the exercise did result in an uptick in page views albeit off a very low base. Final result: 0 sign ups.

In reality its likely too soon to make any conclusions as its been only less then a month, but the preliminary results feels disappointing to say the least.