What is bayes theorem?

To understand Bayes theorem, lets start with the joint distribution between random variables \(Y\), which we will designate as the cause, \(X\), as the effect. The variables are binary taking on values of either \(0\) or\(1\). \[P(X,Y)\]

The above is often shown as \[\frac{(Likelihood)*(Prior)}{(Normalization)} = (Posterior)\]

Essentially, we are updating our prior belief of \(Y\) represented as \(P(Y)\) by the likelihood effect given the cause divided by some normalization constant to arrive upon a new belief of \(Y\) given \(X\).

Joint distributions are hard to deal with…

Graphical models are ways to address the computation load of some joint distributions by introducing domain expertise in the form of cause and effect relationships.

“The first is to see the network as a representation of the joint probability distribution. The second is to view it as an encoding of a collection of conditional independence statements.” - AIMA [2]

Said simply its a graphical model defining conditional relationships between random variables, with connecting arrows (not bi-directional as its acyclic (not cyclical)) usually in the arrows flowing from causes to effects.

Sticking with the example from Wikipedia, lets work with a small graphical model represented by a set of three random boolean variables, \(s\), \(rain\), \(wet\), where \(s\) stands for sprinkler. 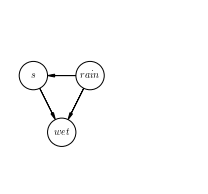 The joint distribution over \(s, rain, wet\) can be now be represented as \(P(wet|s,rain)P(s|rain)P(rain)\)

We can derive a CPT, conditional probability table, from the graphical model. This is where the domain knowledge comes into play as the CPT is typically provided.

Lets assume the below CPT (I set the probabilities using some common sense):

Example: Probability that its not raining given the evidence that the sprinkler is on and its not wet.

This value seems reasonable, as we would expect that it was not raining if the sprinkler was on in addition if the grass was not wet.

Markov blanket for a node in a Bayesian Network is a set of nodes that consists of the nodes parents, children, and childrens parents.

The Markov Blanket is a powerful tool in reducing the computational load.

“play an important role in using probabilistic models for pattern recognition by simplifying both the structure of a modle and the computations needed to perform inference and leearning under that model.” - Bishop [1]

Rules as outlined below: [2]

Rule 1: x and y are d-connected if there is an unblocked path between them.

Rule 3: If a collider is a member of the conditioning set Z, or has a descendant in Z, then it no longer blocks any path that traces this collider.