Turtlepi #6: Dealing with Quaternions, no not GANs

This is a quick post to better understand the concept of quaternions and its relation to robotics. The catalyst for this particular post was the use of tf::Quaternion in a recent ROS implementation, and a self directed question inquiring whether or not I truly understood and remember the concept of a quaternion. The answer was no, and is still no, but I can definitely say that I remember more now than I did the day before.

Quaternions are used to represent rotations and is an alternative to the often referenced Euler angles. Despite the elevated complexity with respect to the learning curve, the benefits warrant the effort. Some benefits cited included: [1]

What is a Quaternion

Before moving forward, at this point we need to review a few properties related to quaternions to understand what operations are taking place.

Before we proceed lets consider the fundamental formula of quaternion algebra discovered by William Rowan Hamilton . For some context this formula just happened to occur to Mr. Hamilton as he was walking along some river. [2] Impressive to say the least. \[ i^2 = j^2 = k^2 = ijk = -1\]

which can be used along side the associated multiplication table[2]: 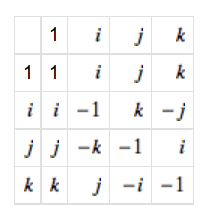 Now that we have the inverse and multiplication results in hand, we can simply relay on plain matrix multiplication to compute the new axis, given the original from and two rotations.

« Turtlepi #5: Getting familiar with boost and its relation to ROS Turtlepi #7: Automatic Target Generation for the Turtlebot »